So, my tablet is broken.

I want a new one.

I can check prices, see used products, and window shop.

But how big is Amazon? And what was Amazon revenue in 2020?

Let’s check out the facts!

Amazon has become the benchmark or role model for other eCommerce brands since it always comes up with the most innovative solutions. It was the first company in the industry to reach a trillion-dollar market cap.

On top of that, Amazon (AMZN) is one of the biggest and most powerful public companies in the world.

Whether you’re a regular customer, an industry enthusiast or a savvy stock market investor, you will find the following Amazon revenue statistics quite interesting. So read on!

Amazon sales statistics for the first quarter of 2021 show that every minute Amazon earns around $837,330. This means that the company makes more than $50 million every hour.

This certainly translates into a huge amount at the end of the year. But we’ll look into the Amazon annual revenue later.

2. Amazon would lose £32 million an hour during an internet outage.

The Amazon annual profit statistics show that every minute counts. So, how would a platform blackout affect the company’s finances?

Merchant Machine has estimated that a 24-hour worldwide internet outage would cost Amazon a tremendous $768 million – around $32 million per hour and just over half a million dollars per minute.

Back in 2013, Amazon’s website wasn’t operational for 40 minutes. The company estimates that it lost around $5 million in sales during this time. 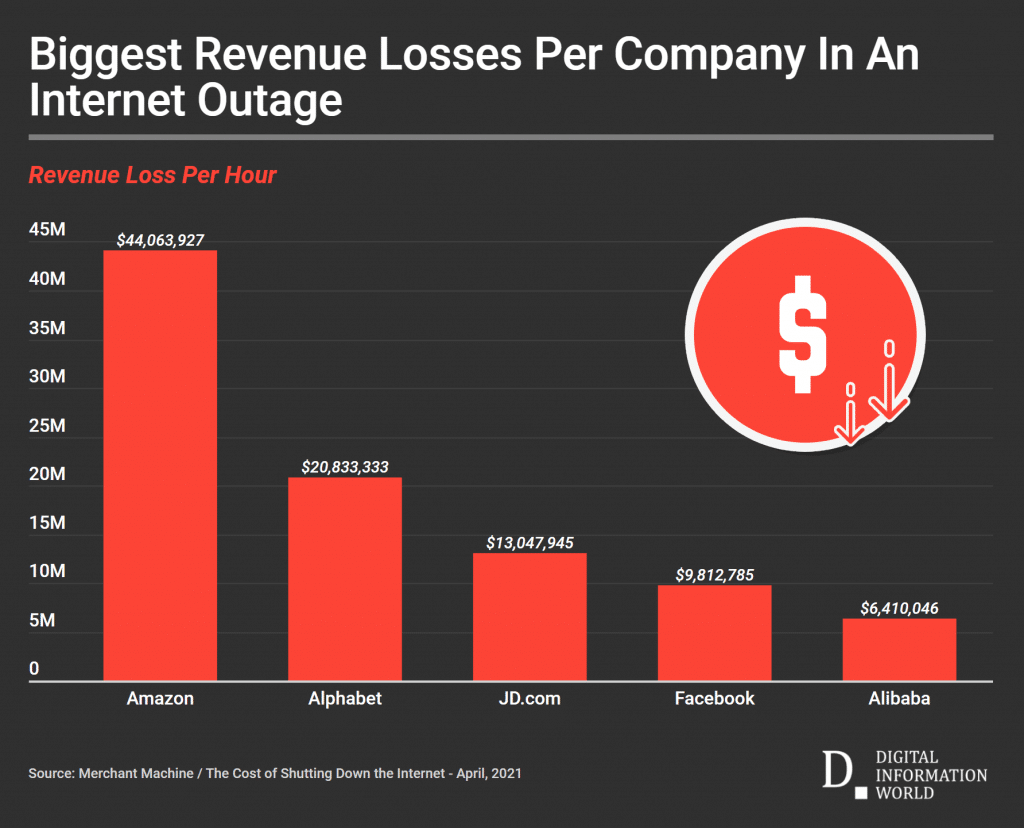 AMZN 2020 earnings were once again impacted by the innovative solutions introduced by the company. One of the most profitable areas was the cloud computing power of Amazon Web Storage (AWS).

The exact figure is $297,381. While it’s impressive, Amazon lags behind two of its main competitors.

5. 80% of sellers on Amazon sell on other platforms.

An Amazon revenue analysis shows that sellers use different platforms to sell on. This signifies growing competition and private label brands launching their own eCommerce platforms. Sellers want to make sure that they diversify their products to other platforms and never solely rely on Amazon.

Since Amazon has so many products, there is a lot of competition, too.

The Amazon total revenue is dependent on the sale of electronics and other products, as well as third-party seller services like Amazon Kindle, Amazon Prime subscriptions, and Amazon Web Services.

Amazon made $21.3 billion in 2020, Amazon annual profit statistics tell us.

Comparing the company’s net profit to the GDP of countries in the world, Amazon ranks as the 115thst richest country. It lies ahead of Botswana, Afghanistan, and Mali and just behind  Bosnia And Herzegovina, Laos, and Papua New Guinea.

Even after an almost $40 billion divorce settlement, Jeff Bezos is still worth $201.8 billion as of 2020. With the impressive Amazon revenue growth, this shouldn’t be a surprise.

Bezos founded Amazon in 2004 in his garage. He owns 16% of Amazon and remains the CEO of the company.

Prepare to be mind-blown.

The average salary in the US is $52,276 per year. This means that it would take around 1.5 years for an average US household to make what Bezos makes in a minute.

Brb, crying in the corner.

For comparison, this is more than twice the population of Germany!

Since Amazon sells to many countries around the world, it gets a lot of traction every minute (no wonder the Amazon daily revenue is so high). The platform receives twice as many visitors as its main competitor, eBay, and four times more than Best Buy.

10. Amazon revenue from the USA makes up for over 60% of the total.

Amazon revenue from North America is 61% of its total sales. Almost 28% comes from its international market, while 11% is generated by Amazon Web Services (AWS).

11. Amazon’s biggest competitor in Europe and Asia is Alibaba.

Amazon revenue from Europe and Asia shows that it’s definitely out-earning Alibaba. However, the gap continues to close.

Alibaba revenue was 38% up in the final quarter of 2020. Meanwhile, Amazon revenue stats show a 21% quarterly increase.

It looks like Alibaba is the faster-growing company, but that’s not the whole story.

Alibaba already dominates the Chinese market. Now the company’s challenge is finding new customers in Europe. But Amazon has a head start on that continent, with about 10% of European e-commerce taking place on Amazon.

Bloom Reach found that most consumers start searching for online sales from Amazon. 90% of consumers also compare prices for any product on competing websites from Amazon.

This is why it is a good idea to sell your products on Amazon if you have an online business. Customers often use Amazon as their primary search stop.

13. 5 Out of 10 teenagers consider Amazon as their favorite online shopping website.

In 2020, some 52% of teenagers considered Amazon to be their preferred online shopping website. This may be because Amazon offers convenience, a huge range of products, and low prices.

Amazon Prime Day is a two-day event that has amazing sales for customers. And judging by Amazon Prime statistics, it sure is a winning strategy for the giant too!

Amazon advertised the event as a way to promote its Amazon Prime service. The sale showed customers the benefits of Prime Video, Amazon Music, and faster delivery for certain items. Subscription members saved over a billion dollars during the event.

We can say that it’s a fan-favorite.

15. Prices of Whole Foods were slashed by 43% after Amazon acquired the company.

Amazon took over Whole Foods in 2017. The company cut down on prices by 43% on the very first day.

This shows that they are selling the goods at a mere profit margin of a few cents.

16. Amazon spends the most on shipping and marketing.

Amazon shipping spendings in 2020 were $61.1 billion for the millions of items it sold worldwide. This was up from the $37.9 billion spent in the previous year.

There are around 142 million Amazon Prime members in the world.  The Amazon prime revenue shows that they typically spend around $1,968 yearly, or almost four times as much as non-Prime shoppers.

Amazon Prime statistics show that they spend consumers try to justify their $100 subscription service by purchasing more on Amazon.

One side of this is surely winning.

Amazon ad revenue is giving Google and Facebook good competition in the ad revenue market. As the company continues to experience growth, it will become more expensive to display ads on Amazon.

By 2023, the company is expected to generate over $30 billion from its advertising activities in the US.

Rising by almost $10 billion in a year, the Amazon AWS revenue growth hit an all-time high at the end of 2020.

In the final three months, the Amazon Web Service made $12.74 billion, compared to the $9.95 billion generated during the same time in 2019.

20. Only 2% of Alexa owners make new purchases via it.

Amazon Alexa revenue stats show that only 2% of people use Alexa to make newer purchases.

This shows that consumers still value reading about and seeing the products before they make a purchase.

On the other side, since 2015, around 50 million Echos have been sold.

21. Amazon is set to dethrone Walmart as the largest retailer in the US.

Do you need to buy some tech?

Are you in the mood for some new books?

You get the picture.

Amazon is one of the biggest companies in the world. This multi-national conglomerate should be studied properly by business owners and sellers.

Amazon revenue statistics can help you gauge how an eCommerce website should be run. Ultimately, there’s a lot you can learn from Amazon!

If you think that’s interesting, there’s more from where it came from – visit SpendMeNot.com for more exciting stuff!

21 Concerning Identity Theft Statistics to Be Aware of in 2021