In this era of digitalization, we are no longer looking at ads in the newspaper to find work. We are using online platforms, such as gig economy apps. After all, most gig economy statistics state that this is the future of work.

Truth be told, guys, the gig economy has been around for a long time.

Nonetheless, we are going to take a look at some stats to get an idea of why this work arrangement is so popular.

Who knows? Maybe by the time you finish reading this, you will have quit your 9 to 5 job.

What Is Gig Economy?

Before we go on with the gig economy stats and facts, we are going to define gig economy.

A gig worker is the opposite of a salaried worker. Salaried employees are paid for the hours worked. They can have a full time or a part-time job and they have regular shifts. Depending on the employer, they may also have some benefits, such as health insurance.

On the other hand, gig economy workers get paid for the job done. They don’t need to clock in or out. They don’t have lunch breaks or sick days or vacation days.

The client hires a gig worker or a freelancer because they need someone with specific skills or expertise to complete a task.

These are the main participants in the gig economy:

The use of a platform for finding work is optional. A lot of freelancers or gig workers are hired by word of mouth. Or they promote their services in a different way.

While a lot of people can get a ‘gig’, here are some examples that will give you a better idea of how this type of nontraditional employment works.

How Does the Gig Economy Work?

Let’s say you are planning to open a restaurant. You will need someone who will design the menu, but you don’t need to hire a graphic designer full time. There is no need for it – it is a one time gig.

You can start by going to some gig economy websites and searching for a freelance graphic designer. Some may have posted a portfolio on their profile that will help you decide which freelancer you want to work with. In general, gig platforms let clients post a review after the work is done. As only clients that hired the freelancer through the platform are able to leave a review, you will know that the reviews are genuine.

That’s all there’s to it. A consumer needs someone for a specific task, they hire a professional and pay them for the gig. If they are happy with the service, they leave a review. If the client didn’t use a platform, they can recommend the worker to their friends and family.

There are other good examples of on-demand labor. Hiring a babysitter or a dogsitter, a housekeeper, a mover…the list goes on and on.

When Was the Term Gig Economy Coined?

This type of arrangement has been around for a long time. It is nothing new.

What is new is the term – gig economy.

It was coined by journalist Lisa Brown, in an article describing the effects of the 2008 recession.

As Brown pointed out, no one had a regular job anymore. People either lost their jobs, had their hours reduced, or had their salaries reduced. This forced a lot of people to become gig workers or freelancers for supplemental income.

Now that we have covered the basics, let’s move on with the numbers and the facts!

1. 36% of working Americans participate in the gig economy.

It is hard to get a definite number of people who have gig arrangements because unlike traditional employment, this work arrangement isn’t clearly defined.

2. In 2018, the independent workforce contributed $1.3 trillion to the US economy.

If anyone ever tried to tell you that what you are doing isn’t a real job, you can quote this stat.

In all seriousness though, MBO Partners did a report on the State of Independence in America.

The gig economy trends they researched show that the independent workforce in the USA contributed $1.3 trillion to the US economy. To put the number in perspective, Spain’s total GDP that year was $1.4 trillion.

MiLleNniAls aRe rUiNinG tRaDiTiOnAl jObS!
When will they stop ruining everything?

According to gig economy statistics 2019:

While we are here, we should also define which workers are considered full-time independent workers by MBO.

4. 72% of independent workers are such by choice.

5. 1 out of 6 traditional workers would like to become independent.

As stated in the report, for every independent worker who isn’t doing it by choice, there are more than two traditional workers that prefer to work independently. The grass is always greener.

6. Gig workers by choice are more satisfied with their work life than traditional workers.

This is something that is reported in most freelance statistics – independent workers, gig workers or freelancers, are satisfied with the working arrangement because they can be more independent. The location and hours are more flexible.

According to the McKinsey report, independent workers by choice stated that they were happy with many aspects of their arrangement.

On the other hand, those that were doing it out of necessity weren’t satisfied with their income level and security.

7. 15% of independent workers have used a digital platform to find work.

Companies such as Uber and Lyft are considered some of the top gig economy companies. But in reality, most gig workers are using e-commerce marketplaces such as eBay and Etsy.

The report states that:

The Bureau of Labor Statistics gig economy workers or contingent workers definition includes workers who state that their arrangement is temporary and who don’t expect their jobs to last.

As such, they have listed people hired to work during the holiday season for a company’s shipping department. Other good examples include those hired to replace a teacher on maternity leave.

According to their survey, 5.9 million people in the USA held contingent jobs in 2017.

9. Gig work is the primary source of income for 44% of gig workers.

Freelance workforce statistics need to distinguish between workers whose gig work is their primary source of income and those who are doing it just to supplement their income.

According to Edison Research, almost half of gig workers get their primary income by participating in the gig economy.

Let’s check out some freelance statistics regarding the demographics of workers.

Gig economy is the primary source of income for:

The flexibility and independence associated with the freelance economy come at a high cost, it seems.

The Marketplace-Edison Research Poll measured the amount of stress and anxiety among workers regarding their financial situation.

Gig economy workers had higher scores than traditional workers, and this was mostly attributed to the lack of job security and benefits.

13. An unexpected expense of $1,000 would be difficult to pay for 80% of gig workers who derive their primary income that way.

Being anxious about an unexpected medical bill is not something unique for the freelancer economy. Both traditional and gig workers stated that they were fearful about being able to afford healthcare.

However, when asked about whether they would be able to afford an unexpected expense of $1,000, the share of those working in the gig economy that could not be larger.

A $1,000 unexpected expense would be difficult to pay for:

What better source for freelance facts, than the global freelance platform Upwork? 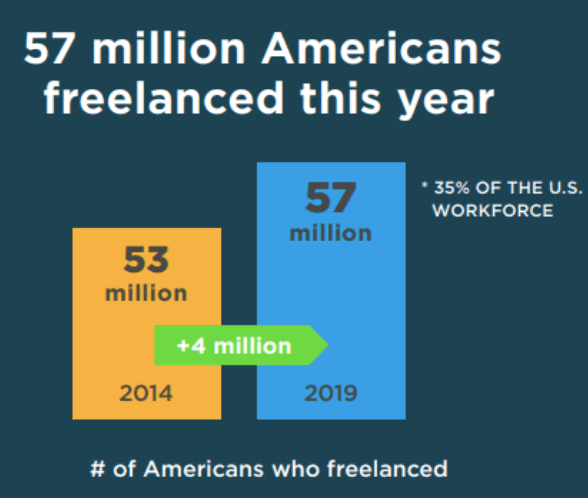 As stated in the Freelancing in America 2019 report by Upwork, Gen Z workers represent the highest share of freelancers of any age bracket since 2014.

16. On average, freelancers earn more per hour than non-freelancers.

Median freelance hourly rates are a bit higher than the overall median hourly US rate.

Freelancers in the US make $20 an hour compared to $18 an hour, which is the median rate for the US overall.

Freelance rates for skilled workers are even higher – the media rate is $28 an hour.

17. 71% of freelancers agree that it allows them to work from anywhere they choose.

The main reason why people prefer freelancing is the flexibility it offers. Not every employer allows telecommuting.

According to the report, 46% of freelancers aren’t able to work for a traditional employer. For most of them – 43% – it is because they have health issues.

18. 7 out of 10 freelancers are interested in moving somewhere other than a large city.

It is the era of digital nomads! There are a lot of options for people who don’t want to settle down in one place, such as gig economy jobs from home.

Most remote freelancers or gig workers are actually highly skilled professionals. In fact, 45% of freelancers are skilled in programming, marketing, IT and business consulting.

Founded by Sara Horowitz in 1995, this is probably one of the largest freelance organizations advocating for policy changes and benefits.

21. 77% of freelancers have a better work-life balance.

According to the 2018 freelance industry report Upwork did on freelancing in the USA, all workers prioritize achieving the lifestyle they want, whether they are freelancing or not.

Yet, freelancers are most likely to achieve this: 84% of full-time freelancers have stated that they got the preferred lifestyle compared to 64% of non-freelancers.

What’s more, 51% of freelancers have stated that they wouldn’t switch to having a traditional job no matter the amount of money offered.

And although 63% of full-time freelancers are anxious about all they have to manage, the majority of them have a better work-life balance. 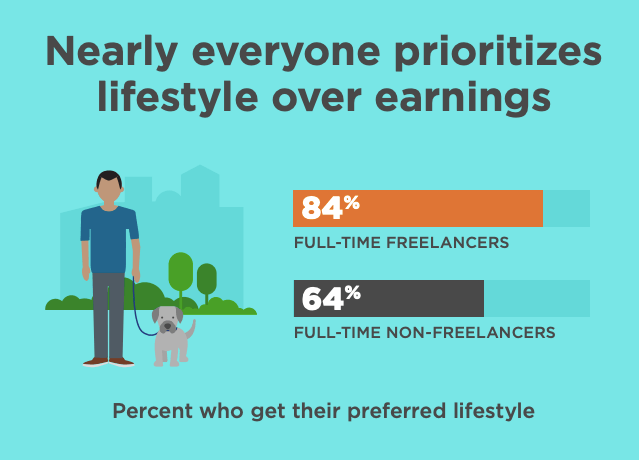 What wannabe remote gig workers want to know is:

What is the average income for freelancers?

As with any industry, the answer is… it depends.

Workers with jobs like Uber and Postmates depend on tips, the number of orders they had, etc. This means that they aren’t getting a fixed hourly rate.

And speaking of Uber and money, you can check out the latest Uber revenue statistics here.

Certain professionals in the freelance industry though get an hourly rate. Like web designers or graphic designers. These are among the highest-paying jobs for freelancers

Now let’s sum up the most important gig economy facts:

Almost 60 million Americans freelanced in 2019. This number wouldn’t mean anything to you if you don’t know the total size of the US workforce which is more than 160 million.

Those that are part of the gig economy by choice are happier than those that need to supplement their income or have no other option.

There are gig workers from all ages and backgrounds – but younger people are more likely to be full-time gig workers, whereas older people do it to supplement their income.

Gig workers by choice enjoy the flexibility offered, whereas others are anxious about their financial security.

And there you have it!

Before you decide to quit your job and become a gig worker, check out a gig economy jobs list so as not to regret your spur of the moment decision.

We hope that these gig economy statistics gave you that push you needed to consider an alternative work arrangement.

See you around SpendMeNot, guys!

27 Millionaire Statistics: What percentage of Americans are millionaires?

25+ Medical Bankruptcy Statistics to Know in 2020

12 Personal Finance Statistics to Know in 2020

23+ Consumer Debt Statistics That Will Shock You in 2020

US Inflation Forecasts and Statistics to Be Aware of in 2020

21+ Cash vs Credit Card Spending Statistics to Know in 2020