SpendMeNot.com is here to answer your questions. We have this treasure map to give you insight on the companies with the biggest revenue per employee ratio.

This Infographic Shows the Revenue per Employee Ratio

Here we go. Brace yourselves: 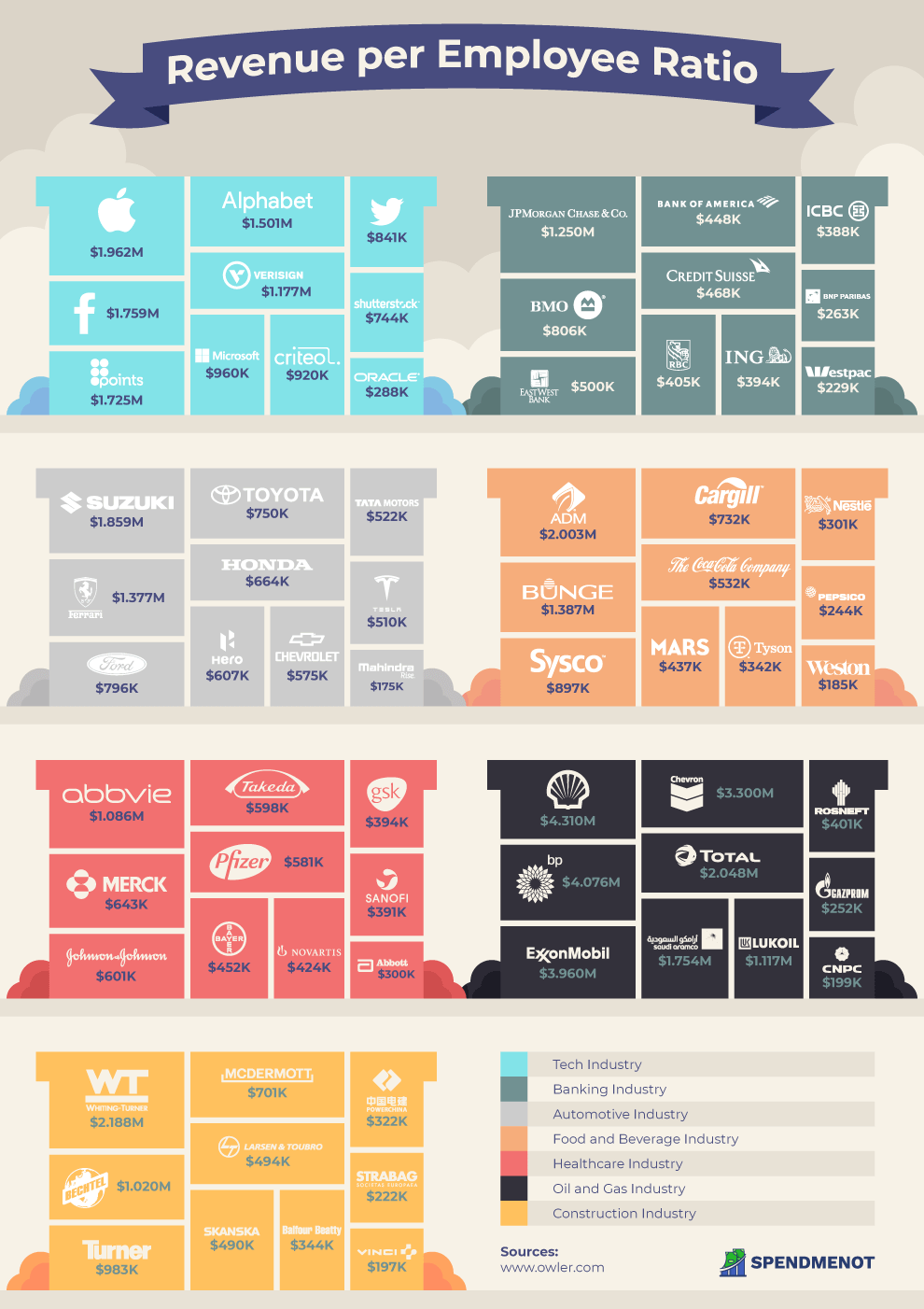 They also highly depend on company size. For instance, workforce demanding companies typically have smaller revenue per employee ratios than companies that require less labor.

What precisely is revenue per employee by industry, and why is it so important?

So, which companies are leading the way in terms of revenue per employee in each industry? And how much money are they making per employee?

Some of these facts will really change the way you think about employees.

This industry makes more money per employee than any other. Get ready to be amazed!

Royal Dutch Shell is one of the most known entities in the oil and natural gas industry. It operates through three segments: Upstream, Downstream, and Corporate. The company’s Downstream segment generates most of the company’s revenue, over $340 billion. The total annual revenue for this year is $396.6 billion, which is what led this company to its mind-boggling employee ratio.

The number of employees at Shell has actually declined over the previous years, from over 100,000 in 2009 to 92,000. When it comes to the current state of the oil and natural gas industry, Shell has three major competitors: Chevron, BP, and Exxon Mobil.

Let’s see how their figures compare.

With the second-highest employee revenue ratio, BP plc operates as a vertically integrated oil and gas industry giant. The holding company of one of the world’s widest petroleum and petrochemicals groups. Its primary activities are exploration and production of crude oil and natural gas, as well as refining, marketing, supply, and transportation. It’s also involved with the manufacturing and marketing of petrochemicals.

The revenue per employee formula is derived from dividing the revenue for a period by the average number of workers for the same period.

ExxonMobil is a US-based multinational oil and gas enterprise, headquartered in Irving, Texas.

According to the latest data on average revenue per employee, Exxon Mobil employs some 71,000 people globally. It has an annual revenue of $281.2 billion, which shows substantial growth from previous years.

When it comes to other firms in the oil and natural gas industry, Chevron is one of Exxon’s biggest rivals, with 108.8% more in revenue per worker. Shell is the second competitor with 13,000 more employees, while Total also ranks highly with 55.2% of Exxon’s per-employee revenue.

Chevron Corporation specializes in providing administrative and financial management, and technology support for energy and chemical operations in the gas and oil industry. And it is one of the largest revenue companies in the business.

In June 2019, the company, which has 48,600 employees, reported a financial year an annual revenue of $160.4. One of the biggest competitions to Chevron Corporation is Exxon Mobil, which made 84.7% more in revenue. Shell is another major rival, with $236.2 more in revenue, while ConocoPhillips has 35,300 fewer employees.

According to the latest revenue per employee by industry figures for the oil and gas industry, Total is 5th. A Paris-based company, it is one of the largest companies worldwide based on revenue. In 2018, the company generated some $209.3 billion in revenue, with 102,168 employees.

As to the other companies, Exxon Mobil is one of Total’s biggest competitors, generating 34% more than Total in revenue. The second top competitor is Chevron with 53,568 fewer employees, while ConocoPhillips generates $169.5 billion less in revenue.

Saudi Aramco’s production infrastructure leads the oil and gas industry in the scale of production, operational reliability, and technical advances, the company’s web presentation tells us.

Saudi Aramco is close to being one of the biggest energy companies in the world, even though it’s not one of the companies with the highest revenue; it generates an estimated annual revenue of $93.8 billion, with 65,266 employees.

Saudi Aramco, like any other company in this highly-competitive business, has some big competitors.

Shell, in terms of employee numbers, with 18,734 more employees; Total, generating 223% of the revenue of Saudi Aramco, and ADNOC, which generates $33.8 billion less in revenue.

JPMorgan Chase is a financial holding company, which provides financial and investment banking services. According to the latest data, the firm has an annual revenue of $25 billion, with 189,315 employees.

When it comes to profits per employee, Lukoil is in the top 10 oil companies in the world.

The Russian giant engages in the exploration, production, refining, marketing, and distribution of oil. The company also ranks first among the world’s largest private companies in the oil and gas industry.

Lukoil has 103,600 employees and a revenue of $115.8 billion. Its main competitors are other Russian companies, namely Rosneft, with 102% of Lukoil’s revenue, Gazprom Neft with 103,590 fewer employees, and Surgutneftegas, generating $95.9 billion less in revenue.

There are over 700,000 construction companies in the US, and Whiting-Turner Contracting is one of the nation’s largest construction management and general contracting firms. It offers design-build and integrated project delivery services on projects of various sizes, for a diverse group of customers. The company must be doing it right, as it has the highest profit per employee in the business.

With offices nationwide, the firm has 3,976 employees and an estimated annual revenue of $8.7 billion. According to the latest research, Bechtel is one of Whiting-Turner‘s top competitors with 51,024 more employees. The second biggest rival is Fluor with $9.1 billion more in revenue, while coming in third place is McDermott, generating 95% of Whiting-Turner‘s revenue.

ADM is a US-based global food and beverage industry. The company’s special focus lies in the processing of oilseeds and soybeans.

Archer Daniels Midland saw revenue growth of 5.8% in 2018, making a total of $63.3 billion with 31,600 employees, revenue per employee benchmark figures show. One of the company’s biggest rivals is Cargill, generating $50.1 billion more in revenue. The second rival is Bunge, which generates 67% of ADM’s revenue, while Ingredion generates $59.1 less in revenue than ADM.

Apple is one of the leading companies in the tech industry; it engages in the design, manufacturing, and marketing of mobile communication and media devices, personal computers, as well as portable digital music players.

The car industry provides one of the answers to the question of what industries make the most money.

The Japanese multinational corporation is a big player in this industry. The company engages in research, development, design, manufacture, sale, and distribution of motorcycles, passenger cars, commercial vehicles, and special machines.

The company has 14,571 employees and an annual revenue of $27.1 billion. The biggest competitor to Suzuki in the employee number department is Honda, with 205,151 more employees. In the revenue department, Yamaha Motor, generating $12.2 billion less revenue than Suzuki, and Toyota, with $249.8 billion more in revenue, are Suzuki’s biggest rivals, revenue per employee by industry data finds.

Established in 2004 by Mark Zuckerberg, Facebook’s mission is to bring people from all over the world closer together. People use Facebook to remain linked with friends and family, learn what’s going on in the world, and share and express what is important to them.

Within the tech industry, the social network is the benchmark for success; it has an annual revenue of $62.6 billion and 35,587 employees. There are three leading rivals: Amazon (revenue per employee $2,148,875), which generates 402% of Facebook’s revenue, Apple, generating $196.4 billion more in revenue, and Google, which has  $85.7 billion more in revenue than Facebook.

Points is an ecommerce company that provides technology solutions such as loyalty wallet, points travel, and other loyalty solutions. It’s also one of the leading companies in this subsector of the tech industry.

According to the latest research, Points has an annual revenue of $365.9 million and 212 employees. The biggest rivals for this company are LoyaltyOne, generating $265.9 million less in revenue, Payback, generating 0.80% of Points’s revenue, and Aimia with 1,288 more employees.

Here’s another company that exhibits an exemplary employee efficiency ratio:

Alphabet is a company that engages in the acquisition and operation of different industries, including technology, life sciences, investment capital, and research. It is a holding company for Google and several Google entities, including Google X, Google Ventures, Google Capital, Calico, and its Life Sciences efforts.

To achieve these high sales per employee numbers, Bunge operates as a holding company in the food and beverage industry, specializing in the supply and transportation of agricultural commodities. The company is headquartered in White Plains, New York.

And here are the numbers:

It has a revenue of $43 billion and 31,000 employees. Bunge’s main competitors are Cargill, generating $70.5 billion more in revenue, RiceTec, generating 0.17% of the revenue, and ADM, with 600 more employees.

Founded by the famous Enzo Ferrari, Ferrari is an Italy-based designer, manufacturer, and retailer of sports cars.

The Prancing Horse has an annual revenue of $4.2 billion, with 3,049 employees. While looking for the payroll percentage of revenue data – sadly unavailable – we found that Ferrari increased their profits by 46% in 2018. Ferrari’s top competitors are McLaren, which generates $3.1 billion less in revenue, Automobili Lamborghini, generating $3.5 billion less in revenue, and Lotus, generating 4.14% the revenue of Ferrari.

VeriSign is a company with a mission to enable the security, safety, and reliability of internet infrastructure. The Company operates through the tech industry and has an annual revenue of $1.2 billion, with 1,019 employees, which doesn’t exactly make it one of the largest revenue companies.

VeriSign’s top competitors are GoDaddy, with 5,802 more employees, Comodo, generating $0.7 billion less in revenue, and DigiCert, which generates around 45% of the revenue of VeriSign.

Operating in the healthcare industry, the company has an annual revenue of $32.6 billion and 30,000 employees. The top competitors of AbbVie are Amgen, which has 9,000 fewer employees, Novo Nordisk, generating $17.6 billion less in revenue, and GSK, which earns 120% more than Abbvie.

The list of companies with highest revenue per employee wouldn’t be complete without Bechtel, the 12th largest construction contractor worldwide. The company works on projects that range from civil infrastructure, power, telecommunications, and government services.

What we can learn from this list is that companies which rely on natural resources and physical capital tend to do much better than those relying on human capital and resources. As a result, they are able to generate revenue with less reliance on employees than other companies. 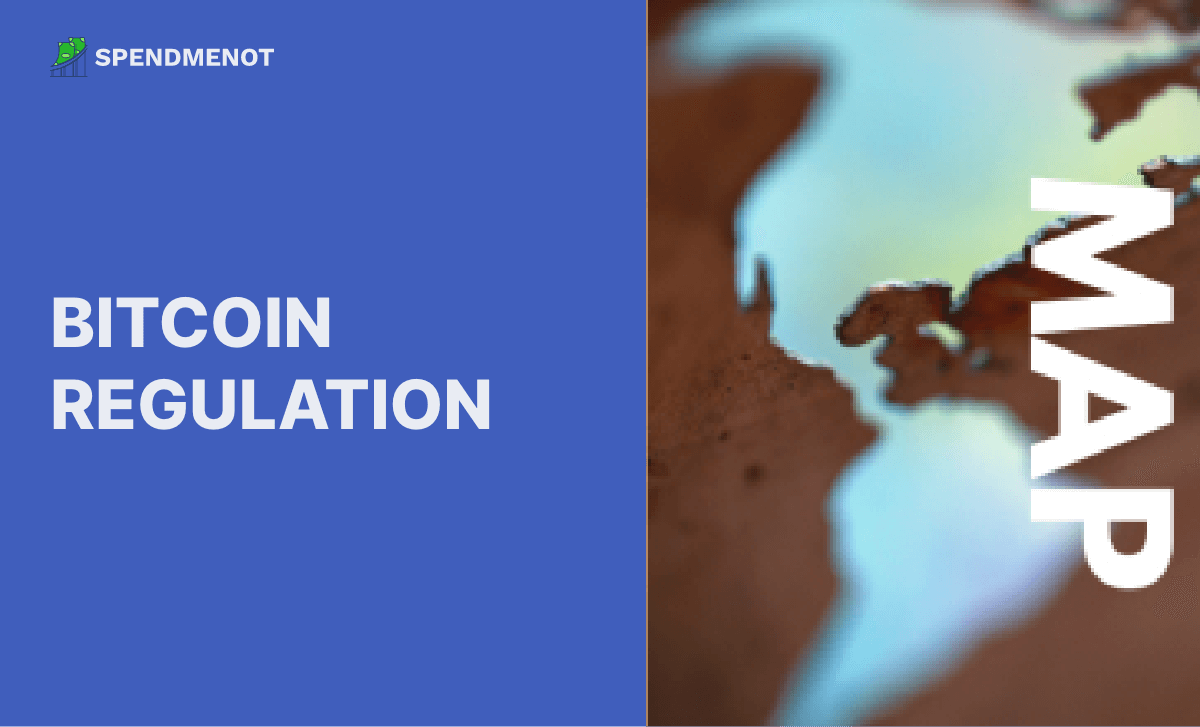