We all love Uber.

It is easy to use.

Let’s warm up with some of the hottest Uber revenue statistics:

Uber’s is the go-to affordable peer-to-peer ridesharing service that millions of consumers use. And it is obvious why they love it.

It’s somewhere in the middle between expensive taxis and cheap public transport.
You get all the comfort of riding in a car without having to shell out a fortune.

And seeing how fascinated everyone is with ride-sharing, we’ve compiled a list of the most fascinating Uber statistics.

Let’s check them out!

How Does Uber Work?

What is Uber’s business model? After all, that is what brings home all the big bucks.

It is quite simple:

You are matched with a driver.

Are the drivers Uber employees?

Nope. They are contractors.

Anyway, the driver picks you up, takes you to your destination and after that, both you (the rider) and the driver have the option to rate each other (like in Nosedive, that Black Mirror episode).

That’s all there is to it — this multinational ride-hailing company offers ridesharing (yes, there is a difference), ride-hailing and delivering your favorite food. Be it junk or healthy, Uber Eats will deliver it.

Aside from the business model, let’s give a shout out to all the riders and drivers doing their share for the multibillion-dollar revenue of this ridesharing and ride-hailing company.

How many trips does Uber do a day?

Well, according to Business of Apps, Uber completed on average 18.7 million trips per day in 2020.

Meanwhile, a graph by Todd W. Schneider has compared the daily trips of Uber, Lyft and Taxis in New York. The result?

According to facts and figures from Uber, as of December 2018, the platform had 91 million monthly active users.

Have you ever wondered about what the average Uber rider looks like?

Well, even if you haven’t, here is a description:

The average Uber user is an American male aged 16-24, who also lives in a suburban area.

A graph by the Global Web Index on the demographics of Uber users shows the following:

There is no surprise that the younger generations enjoy Uber. Taxis and ridesharing services play a big part in millennial spending habits.

You can use the Uber app to get a ride in more than 10,000 cities worldwide.

But where is Uber most popular?

Uber revenue by region data shows that the company makes the most in the US and Canada. There, the service generated $6.8 billion in 2020. The EMEA (Europe, Middle East, and Africa) region was next with $1.8 billion. The Asia-Pacific contributed $1.5 billion to Uber annual revenue, while Latin America generated $1.3 billion.

The Uber statistics from 2020 show that the ride-hailing service completed 5.025 billion trips worldwide.

This is an impressive number. Especially, considering the global pandemic and the fact that the company had completed 10 billion trips in the period 2010-2018.

5. Uber has more than 5 million drivers.

Now that we know how many people use the Uber rider app, a new question arises:

How many Uber drivers are there?

Well, it turns out that over 5 million people use the app as drivers.

An older graph about the demographics of the drivers shows that 86% are male and 14% are female.

Now, let’s take a look at all of the numbers by checking out the most relevant Uber revenue statistics.

Depending on the source, the market share that both Uber and its competitors hold varies.

Data by Bloomberg Second Measure suggests that the Uber market share in the USA amounted to 69% as of July 2021. The same source states that Uber’s rival Lyft holds 31% of the ride-hailing market. 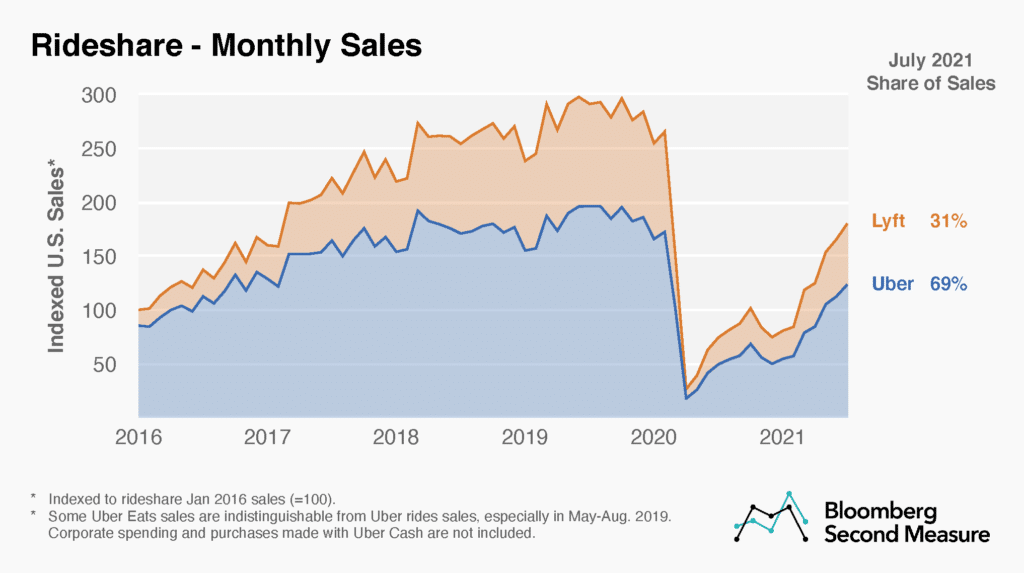 As reported by the company, Uber annual revenue reached $11.14 billion in 2020. This represents a decrease of 14.32% compared to the previous year.

The Uber 2020 financial results further show that the company’s gross bookings slid 11% to $57.89 billion. This is the amount received from the customers before all of the expenses have been paid out (including payouts to the drivers).

Uber’s net revenue through the years:

If a company has negative EPS (earnings per share), this means it isn’t making enough profits. The amount of profits is divided by the number of shares. Uber shares have had a negative EPS for 13 consecutive quarters.

But in Q2 2021, EPS came in positive, beating analysts’ forecasts of another quarterly loss per share.

So, in terms of Uber profit, things remained grim in 2020, with the company posting a $6.76 billion net loss.

Uber Technologies went public on May 9, 2019 on the NYSE stock exchanges. The shares were priced at $45 each and were listed under the recognizable UBER ticker symbol.

It’s been a pretty bumpy ride since then. In line with stock market statistics and trends, the stock started falling in September following the IPO. After closing 2019 at just over $30, Uber shares started a steady climb, interrupted by several hiccups in 2020.

Every trader who owns Uber stocks was happy to see the shares reaching an all-time high of $60.63 on February 12, 2021. At the time of writing, the company is hovering around its listing price level, but prospects are generally good.

The app is what connects you with your ride. You can download it on iOS and Android. 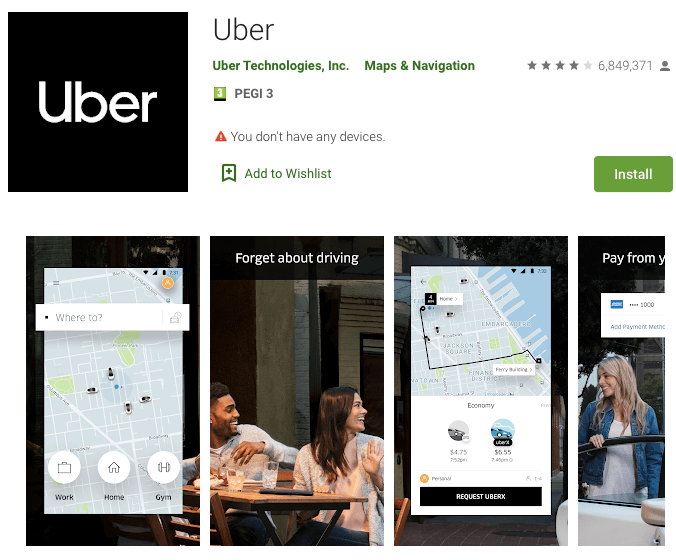 It is fairly easy to download and install, and millions of people are already using it.

Let’s see how many users are there.

While the beta version was created in 2010, Uber officially launched its app in 2011 in San Francisco. By 2016, the platform had 50 million active monthly users.

This was a turbulent and controversial year for Uber, marked by the #deleteUber movement when 400,000 users scrapped their accounts.

It all started with US President Donald Trump’s travel ban and the taxi protests at JFK airport. Uber’s dynamic pricing angered consumers, who accused the ride-sharing service of taking advantage of the situation to make profits.

Dynamic pricing, or surge pricing, is when a company increases the price of goods and services if demand increases.

Uber’s official website states that it had 91 million active users as of December 2018. However, according to Statista, 95 million people used the car app actively on a monthly basis.

It seems that active monthly users growth remained steady in 2019. It would be interesting to see if the trend will continue in the new decade as well.

The COVID-19 crisis slashed the number of active users to 55 million. But as the pandemic subsides, people are returning to their old habits of using the service.

This online food ordering platform was launched by Uber in 2014, again starting in San Francisco, California.

So, how does Uber Eats work? 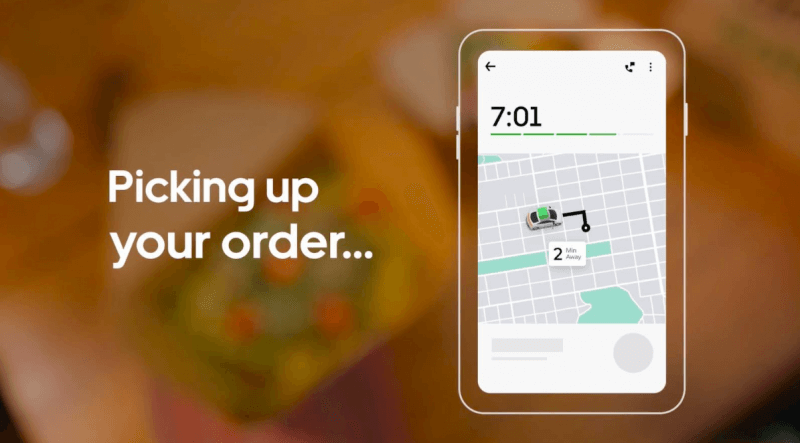 17. Uber has partnered with more than 600,000 restaurants worldwide.

You can use the app to place an order with:

Uber also allows you to add your location and look at the ‘open restaurants near me’ based on the type of food you are looking for.

The lockdowns of 2020 in many developed markets gave rise to the food delivery businesses.

The unit also more than doubled its gross bookings in 2020, which amounted to $30.2 billion compared to just $14.5 billion the previous year.

According to Bloomberg Second Measure data, in July 2021, DoorDash had the largest share of the food delivery market — 57%. Uber Eats driver app came in second place with 23%, followed by Grubhub with 16%. 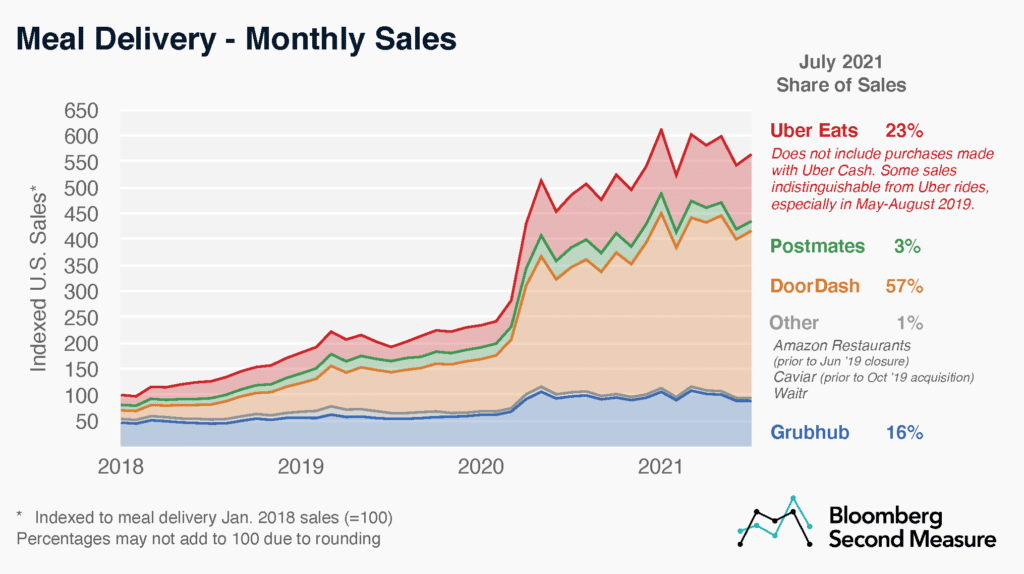 20. When ordering food from Uber, consumers spend $28.67 on average per order.

Orders placed on the Doordash food ordering platform have the highest average cost of $36.95.
Uber Eats has the second most expensive orders placed, averaging at $28.67.

And if there is anything we’ve learned from the US personal finance statistics, it is that Americans don’t have a lot of savings, so they need the cheapest option available.

After all of the expenses involved in delivering have been deducted, the drivers delivering your food via the Uber platform make somewhere between $8 and $12 per hour.

So, how to become an Uber Eats driver?

These are the requirements:

Who Are Uber’s Competitors?

As Uber can be considered a jack of all trades, the company has various competitors.

We will group them by industry:

While Lyft only holds around one-third of the ride-hailing market, it is still considered one of Uber’s main competitors.

Both Lyft and Uber are offering personal mobility alternatives. Lyft acquired Motivate, one of the largest bike-sharing companies, and Uber also offers bike-sharing.

GrubHub and DoorDash are constantly competing to be the number one food ordering platform in the US. For now, Uber is only the second-best.

When it comes to ride-hailing, Lyft is Uber’s main competitor. Lyft had 17.1 million users in the second quarter of 2021.

And while Lyft still hasn’t completed as many rides as Uber, it’s quickly catching up. In 2020, Lyft’s revenue reached $2.3 billion, which was 36% down compared to the previous year. And according to the Uber revenue statistics, the company suffered only around a 14% decrease during this turbulent year.

As for food ordering, DoorDash and GrubHub seem to be Uber’s main competitors. While Uber delivers to more cities worldwide, DoorDash is only available in the US and Canada. Nonetheless, DoorDash is rapidly growing and increasing its revenue.

It’s hard to say which one is cheaper, as the price varies depending on the location, taxes, delivery fee and service fee (applicable for DoorDash only).

Lastly, according to the official Uber statistics from their websites, we can say that the company has more employees and greater scope. So, we can assume that Uber has more gigs for drivers compared to DoorDash, though supposedly DoorDash drivers earn more money.

When Uber was first launched, the company revolutionized ride-hailing as we know it. Uber changed the market so much that there is now a new term for the process — uberization.

Alas, all good things must come to an end. Uber now has many competitors, as well as a history full of controversies that have prompted users to delete the app for good.

The main thing is that Uber is aware that they need to revolutionize a new industry. From being one of the most prominent transportation network companies, Uber is now also one of the main players in the food delivery market.

So, what does the future hold for Uber?

Time will show. But these recent Uber revenue statistics show that the company is quick to get back on track after a challenge. So, the odds are good.

See you around on SpendMeNot.com, everyone!

US Inflation Forecasts and Statistics to Be Aware of in 2021

21+ Cash vs Credit Card Spending Statistics to Know in 2021